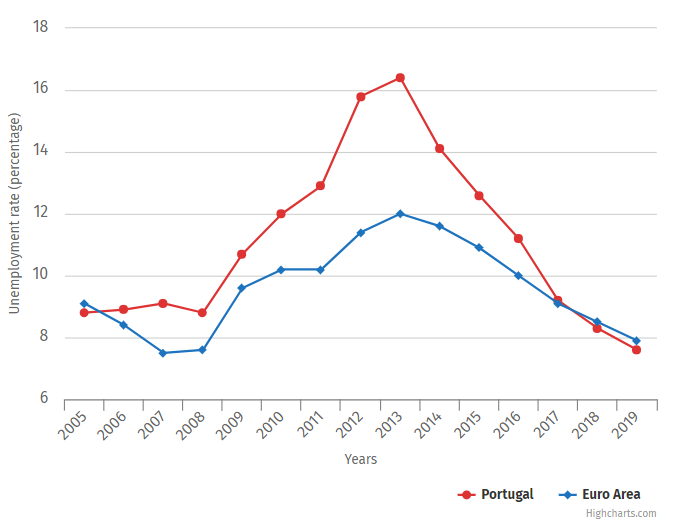 In 2014 a widely supported plan was put in place to increase the minimum monthly wage gradually from its then level of €485 net, both to reduce poverty levels and in an effort to increase domestic consumer spending. Now in 2018, the minimum wage has increased to €580 net (€677 gross) and accounts for 22.9% of the Portuguese workforce (760 thousand workers). Meanwhile over this same period, unemployment has nearly halved to 7.9% in 2018, showing that it is possible to dramatically reduce unemployment and grow wages at the same time.

This increase in minimum wages reflects a broader move in the Portuguese economy to try and compete on factors other than just cost, which can be seen across various sectors – for example the Portugal apparel sourcing sector has seen a dramatic move away from churning out low end mass-produced goods to becoming a leading centre of excellence in Europe for higher end production; those factories that have made the move to this higher-end production are typically paying 20%+ over minimum wage anyway and even at these wages are struggling to find skilled workers.

Whilst it is refreshing to see Portuguese manufacturers moving up the value chain from mass-produced goods on threadbare margins to products with more value-added, much of this has been driven by foreign companies investing in production in Portugal or Portuguese owned manufacturers making goods for foreign brands. The next more problematic step is for Portuguese companies to grow their brand presence abroad to get their hands on the most attractive part of the value chain, but there is often insufficient know-how and/or ambition for Portuguese brands to really make an impact outside of Portugal.

The parts of the economy that are really driving growth are generally operating away from the minimum wage end of production, so the fact that the minimum wage looks set to continue to grow over the coming years, should not have a negative impact on economic growth, rather it may help to push the economy into more productive, value-added sectors. It remains to be seen to what extent Portuguese brands will be able to make the final step up the value chain to penetrate overseas markets though, as to do so will require a substantial growth in the resources needed to support it.